“Trying to grasp a melody is about as easy as trying to remember a dream. Sometimes it happens quickly, and the piece can be played immediately—these are the strokes of luck. The eleven compositions on Sophie Said by the Berlin pianist Christian von der Goltz are precisely these kinds of strokes of luck. Full of feeling, melancholy, swinging and uniquely played.” Sunny Moon

Listen to a sample from Sophie Said: 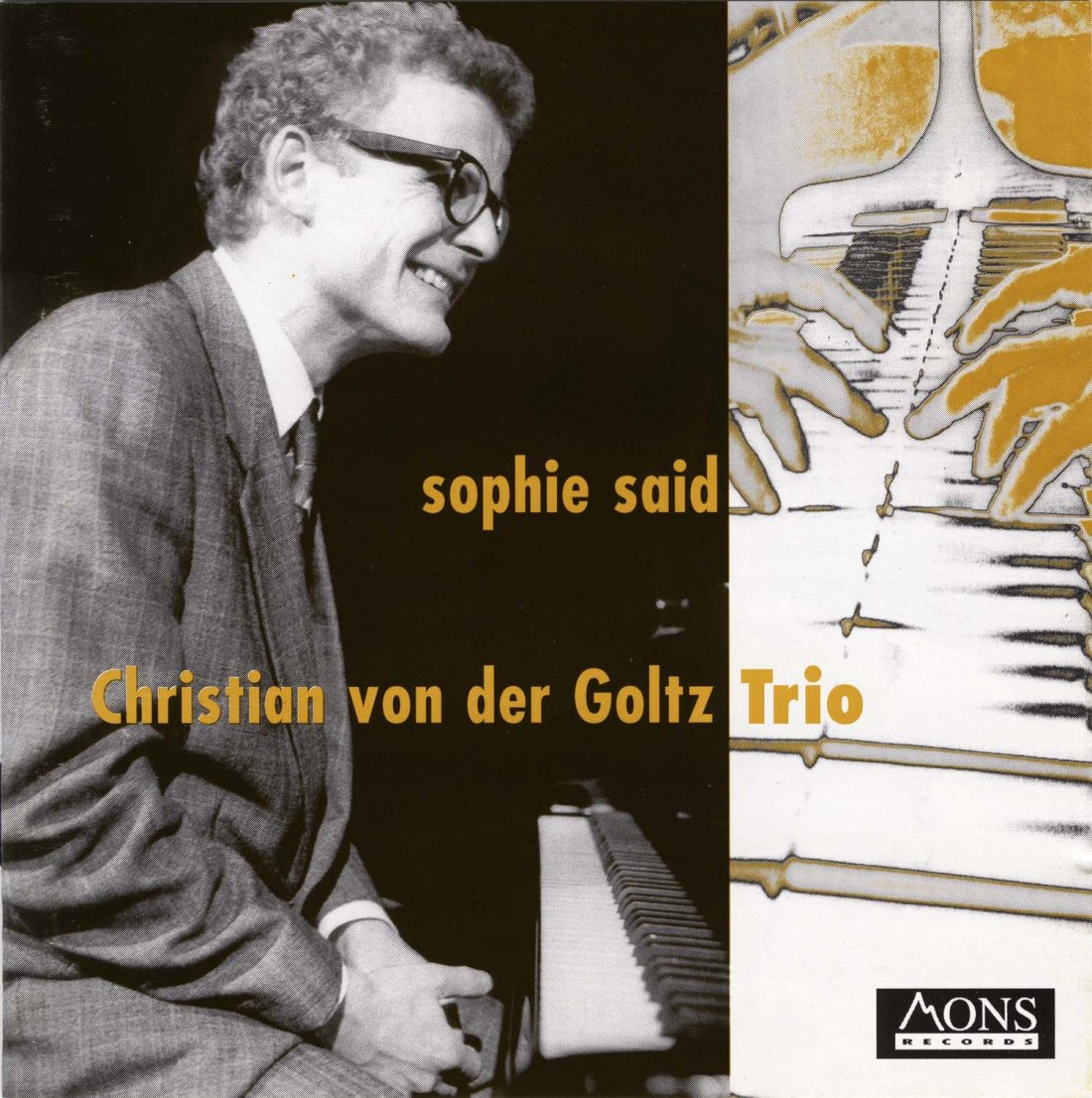 All compositions by Christian von der Goltz except Nos. 3 & 10 (Thad Jones) and No. 8 (Hoagy Carmichael).

The Christian von der Goltz Trio has been at home for years in Berlin’s various jazz clubs. And practice makes perfect. For this reason, the piano-bass-drums combination has in the meantime attained a high level of precision in playing together. “Sophie Said” makes this abundantly clear. Von der Goltz’s compositions have a stylistically multi-faceted sound, and they swing in the best sense of the word. He describes his method of working in the following way: “The ‘appearance’ of a compositional idea is, to me, always the most fascinating aspect of composing: something is suddenly there, incomplete and without form, perhaps, yet unmistakably alive—where was it before that, before it appeared?” (JE)

Since 1996, Christian von der Goltz’s piano trio—with Stefan Weeke, bass, and drummer Michael Griener—has established itself on the Berlin jazz scene; among other things, it was chosen to accompany the tenor saxophonist Spike Robinson at his performance in Berlin in September 1998. The present CD not only introduces von der Goltz as a pianist; it almost exclusively features his own compositions, with the exception of three titles. At the beginning of his career as a jazz musician, von der Goltz orientated himself along the line of pianists of Erroll Garner’s generation, later moving into the direction of modern interpreters including, for example, Bill Evans — all of which indicates that he has studied and absorbed an extremely wide spectrum of playing modes in jazz piano. Accordingly, elements from all these sources surface in his piano style. One of his specialties is the rediscovery of seldom played jazz standards, which he lends a thoroughly unique touch through his modern-orientated mode of interpretation, which still, however, always lets points of reference to tradition shine through. Von der Goltz’s unique quality expresses itself in his compositions, too; they attest to a full-grown maturity in this arena, as well. In the booklet are statements on his method of composition which prove that he doesn’t make it easy on himself in this area of his talent, and that excellence is the highest commandment of his musical creation. As an interpreter of his own works, von der Goltz is accredited with a high technical ability, yet at the same time an extremely finely differentiated dynamics, as well as a rich abundance in ideas. His co-players prove to be veritably custom-tailored for this trio: on the one hand, they’re sensitive accompanists to the leader, and on the other, very listenable solo contributions add to the closure of the interpretations. A highly convincing CD premiere by Christian von der Goltz, who, in addition to other teaching activities, is involved as an educator at the renowned “Hanns Eisler” academy of music.   Gerhard Hopfe

Above all the hollering about “New! Never before heard!”, the ones who are firmly rooted in the tradition and who have adapted it to their very own particular musical idea are unfortunately seldom heard. Christian von der Goltz belongs to this latter category. The piano trio’s idea isn’t new, nor is its concept of piano trio. The compositions on this debut are kept quite traditional in regards to groove and playing concept, yet despite this, Sophie Said is a thoroughly remarkable record.

The Berlin pianist calls his two companions a stroke of luck. Stefan Weeke on bass and Michael Griener are a practiced rhythmic tandem; they don’t merely function as an accompaniment in this trio, but also as musicians of equal standing in the band. In this team, all three have the freedom to react to changes in tempo and nuances in volume with incredible speed, which is why the free rubato parts seem homogenous. In addition, von der Goltz, whose influences certainly have Bill Evans as their source, is a composer who understands how to give each of his pieces something very unique, letting each idea develop into a small microcosm of its own. Beautiful record and a thoroughly successful debut!   Angela Ballhorn

… The trio of the Berlin pianist Christian von der Goltz presents itself as more closely connected to the tradition. What characterizes this music is a dense interaction dominated by a differentiated touch and the sound of the man on the piano, which holds everything together. A high art of touch is paired with a sensitive accompaniment. Von der Goltz reveals himself to be a lyrically influenced pianist. And if you take a closer look at the cover of this CD, you can already guess whose spirit is swinging along in these pieces—namely that of no one less than piano legend Bill Evans. cg

“Sophie Said” by the Christian von der Goltz Trio offers music in the tradition of the legendary Bill Evans, as we know it through the examples of Michel Petrucciani and others — a tradition which distinguishes itself through atmosphere, sensitivity and that certain lyrical moment. The bass, which steps out of its accompanying function to provide contrast, is as obligatory as the melodious drumming and the corresponding piano voicings, including occasional free flights such as “Vanish into Song,” in which a free intro slowly enters into the song, passing through an intensifying middle section, and finding its way back to a tender finale. The tempos are slow and leave enough room for each tone and chord. Ideas are developed, taken up and commented upon by each individual instrument. Besides “Sophie Said,” a smooth Latin number, there are two other piano solo pieces: “Stardust” and “Prayer,” which reminds one of Satie. Von der Goltz: “I was looking for a sound that I couldn’t name; all I knew about it was that it had to exist.” The search was well worth it!   Andreas Ebert

Piano trios in jazz are usually a pretty boring affair. The pianist plays as though he were alone in the studio, and the accompanying musicians are hired to keep the rhythm. In this regard, von der Goltz’s CD presents a wonderful exception, with contributions by the Hanover drummer Michael Griener and bassist Stefan Weeke. Not because it’s especially exciting, innovative or virtuoso, but rather because the musicians allow themselves enough free space to develop their somnambulistic play, without having to rely on any extraneous effects. Every note has its determination, every accent is consciously placed within the framework of a traditional modern jazz concept. It’s as though old masters were at work here, but it turns out to be musicians this side of 30. Compliments!   Bernd Schwope

It has something to do with this CD’s concept that the pianist Christian von der Goltz reminds one of the jazz pianist Dave Brubeck on the cover photo of his CD “Sophie Said.” These eleven pieces, played together with Stefan Weeke (bass) and Michael Griener (drums), are arranged with extreme precision, yet they leave the pianist enough free space, as well: for example, with “Vanish into Song.” Beyond this, the CD is impressive with its sophisticated voicings and perfect interplay. The piano comes across very directly and provides a very pleasing base sound for the trio.

Trying to grasp a melody is about as easy as trying to remember a dream. Sometimes it happens quickly, and the piece can be played immediately—these are the strokes of luck. The eleven compositions on “Sophie Said” by the Berlin pianist Christian von der Goltz are precisely these kinds of strokes of luck. Full of feeling, melancholy, swinging and uniquely played, with Stefan Weeke shining on bass and Michael Griener on drums.

A German pianist who has a little of Bill Evans, a little of Chick Corea, and a lot of himself in his playing. His compositions are the backbone of this album, but the delightful and pleasing execution of them is equally rewarding. While the playing of Goltz is certainly melodious, the inventive side of him is ever apparent. … The formula works exceedingly well and is well executed, resulting in a challenging selection with plenty of room for individuality. There is a breezy atmosphere created by this trio, and most of the songs perpetuate this feeling. … Goltz has woven a series of compositions into a solid recording that exalts the piano trio.”

And again it was you

Complicated Stories (With No End)